I was wracking my brain the other day about how I might explain the difference between a configured product selling cycle powered by sales configurator software and a sales cycle that was handled without those tools. Inspiration finally struck in the form of a memory from my childhood.

Remember Goofus and Gallant? My old man was a pediatrician, and like most kiddie docs, he kept copies of Highlights Magazine in the lobby for kids to peruse while they waited to be seen. He said it was a good way to keep their minds off of all the horrible things they imagined were going to happen once Mom dragged them into the exam room.

There was an instructive cartoon series in the magazine that showed the comparative behaviors of two kids, Goofus and Gallant, when confronted with a wide variety of life’s challenging moments.

Product configurator systems focus the effort on the customer’s needs. Everything cascades down from the information and data collected into the final quotation and proposal generated.

For instance, there would be a panel showing “sycophantic good boy” Gallant holding a door open for a little old lady with the caption saying something like “Gallant waits his turn and always helps his elders by holding the door open for them.”  The next panel would show “sociopathic bad boy” Goofus and the same old lady. The difference would be that Goofus would be shoving her out of the way and grabbing her Social Security check as he brushed by her purse. That caption would say something like, “Goofus always thinks of himself first and doesn’t respect other people’s property.”

Okay, maybe I’m exaggerating the roles a bit, but you get the point.

I started thinking, what if Goofus and Gallant went on to become salespeople? It’s an intriguing idea worth exploring, but due to copyright law and my respect for the original author’s creative product, we’ll need to modify the names.

Sammy and Scammy are two sales reps who are responding to the same sales opportunity. We’ll walk through the major phases of a sale and see how Sammy and Scammy approach the customer and the needs they have.

During the initial inquiry, Sammy takes the time to collect and input vital information related to the customer’s needs into his product configurator system. As the customer relates the nature of their needs and the pain they are wishing to mitigate, Sammy asks questions and confirms the customer’s responses. He knows the application is complex, requiring careful and thorough examination.  Before he loads anything into his sales configurator system, Sammy makes sure he’s got the information right. He also avoids talking product or solution at this time.

Scammy, on the other hand, shrugs and assures the customer that they can handle anything the customer might have. He tells them they do thousands of these things every year, and this one is a piece of cake. He shares a quick joke with them, tells them not to worry, we got this and disappears promising to have a price tomorrow.

Needs Analysis and the Configure-Price-Quote Process

Back in the office, Sammy spends time reviewing the data he has collected during the call. He also reviews the assorted options presented by the sales configurator software for consideration during the discussion. These options reveal several additional questions to be considered by the customer. Sammy calls his contact back. After talking about several unforeseen potential issues, they both agree that a needs analysis may be justified.  The next day, Sammy goes back to the customer with some additional questions and a brief presentation on what the needs analysis will involve.

The customer is impressed that Sammy has such a grasp of the issues related to their situation and quickly invites Sammy back for the needs analysis. A few days later, Sammy is back with the prospect walking through a configurator-driven interview covering all possible needs and options associated with the customer’s problem.

Scammy stops at the bar on the way home and puts away several highballs. By the time he gets back to the office, his memory has been wiped of all the knowledge he collected during the inquiry. He tosses his notes toward the admin and asks that they be typed up and organized. He heads home to get some shut-eye.

The next morning while Sammy is talking to the prospect, Scammy is scratching his head over the notes. They make no sense but he figures, no problem, I’ll just lowball the price, get the order and then blame any problems on the installation crew.

Quotation and Proposal Driven by the CPQ System

Sammy reviews the findings from the needs analysis, which are produced by the product configurator system. There are several options to consider, and these are automatically built into the quotation as pricing options. These are accurate, firm prices, not guesstimates or ballpark quotes. Sales configurator software treats any pricing quote with the same level of importance. Every price quoted is a firm quote.

Once the options are reviewed by the customer, Sammy harnesses the power of his configure-price-quote solution to produce a formal proposal. This is automated, so Sammy doesn’t have to scramble around looking for user stories, product collateral or other documentation to back up the proposal.

That same day, Scammy is looking at his year-to-date quota performance and sees he is about 50K lite. He quickly calls the customer back and tells them that they can handle everything for about $56,000.  Scammy then lets the customer know that if they can decide today, he will knock 10% off the price.

The customer asks Scammy a few pointed questions about his solution. Scammy tells him he’s too busy to talk all day, do you want the deal or not?

So that’s the story.

Product configurator systems focus the effort on the customer’s needs. Everything cascades down from the information and data collected into the final quotation and proposal generated.

Sell it once. Sell it right. 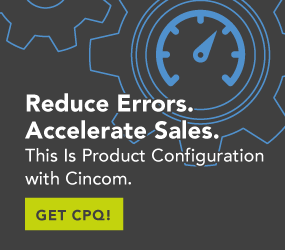 “It is a luxury to put our interests first. It is an honor to put the interests of others before ourselves.”—Simon Sinek from his book, "Together is Better: A Little Book of Inspiration" #ThursdayThoughts #DotheRightThing #Honor #Integrity

“To be successful, you must be daring, be first and be different.”—Ray Kroc #ThursdayThoughts #Leadership #Success #BeDifferent