The performance of aircraft in service is monitored not only by the owner/operator of the airplane but also by the manufacturer and government regulatory agencies. Aviation has one of the best safety records in the entire transportation sector. Part of that safety record can be attributed to the common practice of gathering, manipulating and studying operational data gathered from airplanes in service. Big data is key.

The unfortunate result of aircraft part, system or procedural failure is frequently a catastrophic event. Since the very early days of aviation, the price of failure was too often loss of life, destruction of property and financial ruin. Early aviators learned to become greedy collectors of hard data. That data was frequently where answers regarding causal factors associated with a given event were frequently found. This practice is how humans “learned” to fly.

Today, modern aircraft carry “black boxes” that record in meticulous detail all of the operational information associated with the host aircraft’s flight. Throttle settings, fuel status, airspeed, altitude, performance of hydraulic systems, attitude control surfaces status and all manner of other information is collected and recorded for analysis. Voice conversations from the cockpit are also recorded to provide clues as to why something did or did not happen as prescribed.

Aircraft are becoming increasingly more connected. In the context of the Internet of Things (IoT), this means a potentially huge increase in the amount of data to store and analyse for a given part, aircraft or flight operation. A recent article discussed the number of sensors incorporated into a modern jet engine. The amount of data collected from these sensors is generated in the multiple terabytes of data per hour. That is a staggering amount of information.

This has to be good news for the flying public, for insurers and for aircraft operators. Aerospace already has great data on things like “meantime between failure” rates for parts and complex systems. Trends that might take car companies years to identify reliably will be easily detected. Corrective action, recall notices or airworthiness directives will be issued much earlier than in the past.

This is big data at its big time best. The ability to collect, store and extract useful information from that massive amount of big data will be one of the requirements for success in the highly competitive aerospace arena.

Consumers will not wait for an agency to ground a suspect aircraft. The flying public is highly knowledgeable about the equipment they are flying on, the travails of one model versus another are widely reported in news. Flyers will abandon a platform that is suspect and be slow to return once a fix is implemented. 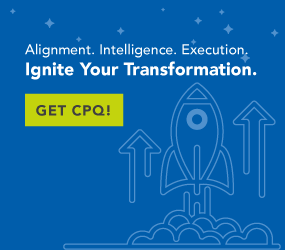 #Globalism is still a key element to enterprise growth, and two types, in particular – economic and political – are important to recognise and understand. Learn more: http://bit.ly/2OOgHiT #EconomicGlobalism #PoliticalGlobalism

Reduce #orderentry time from 2 days to 2 minutes. Here's how: http://bit.ly/2Lca8FN

What are three tools that can speed up a business #salescycle? Find out: http://bit.ly/2S2ubXY

Here are some things you should know if you sell #complex #configured products: http://bit.ly/2L9h4Ug

#Specialtyvehicle manufacturers must make it easy for dealerships to sell. #CPQ makes it easy for #sales to navigate a complex #productcatalogue: http://bit.ly/2S0ocmq